The hugely popular American TV series The Walking Dead is back with the second half of its 6th season. I still remember when the lead stars of the series – Andrew Lincoln and Norman Reedus – came to Singapore a couple of years ago to promote the show’s 4th season premier. There were lots of selfies taken and they were even game enough to play a mock obstacle course with walker attacks. 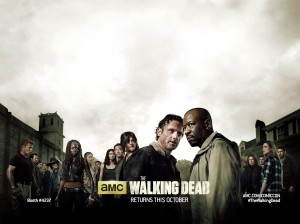 Now I’m seeing them again on TV in their characteristically soiled and bloodstained shirts and grimy hair and I can’t help wondering how badly they must have smelled if ever The Walking Dead were real. Anyway, The Walking Dead is now running on its sixth year on TV and it’s still as popular as ever. Here’s how they manage to remain on top of the charts:

The show is not just about Rick. Sure, risen group leader and once a deputy sheriff Rick Grimes is undoubtedly the show’s main character but the series has since developed other equally kick-ass characters. The redneck Darryl Dixon with his crossbow has risen to prominence and became the viewers’ favorite character. The only Asian-American character in the series, Glenn Rhee, is also an early favorite with his knack for scavenging and escaping.

Another kick-ass character providing valuable asset to the group is Michonne whose favored weapon is a katana. And who would have thought that Carol Peletier, once an abused housewife and damsel in distress, would be upgraded to become a ruthless but reliable member of the group. Carl Grimes, Rick’s son, also grew in the series to being a tough and competent kid looking after his baby sister, Judith.

I’ve talked mostly about the original survivors (with the exception of Michonne) and that’s because they’re really the force that makes this series great. Though the show can be really unpredictable and it has also said goodbyes to other important characters, I’m just glad it has not yet succumbed to the Game of Thrones type of plot where characters die unpredictably, fan favorite or not. 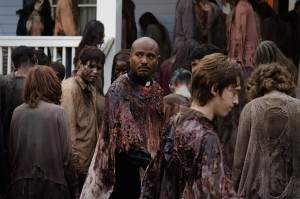 The story is about survival in a post-apocalyptic zombie-infested world. When there’s the struggle to survive, human’s morality also threatens to shatter. Rick’s group has survived not just walker attacks but also internal conflicts and clashes with outsiders and other groups. In order to be part of the group, the outsider is questioned whether he or she has killed walkers, other people, and how many. Rick’s group understands the struggle but fights hard even to the point of risking or sacrificing their lives to look out for one another.

They call them walkers, biters, stinkers. The zombies in The Walking Dead have great prosthetics but they’re really more gory than scary. I think one of the reasons why they no longer come off as frightening is because it’s easy to get used to seeing them in the show.

People have long been fascinated with the idea of zombies but the release of The Walking Dead series has spawned other movies with zombie themes. It’s been years since the first season and the zombie mania have already died down. But still the writers are still able to pull off storylines that keep you at the edge of your seat, screaming at Rick and the group to run faster, faster! The walkers still provide a thrilling chase. 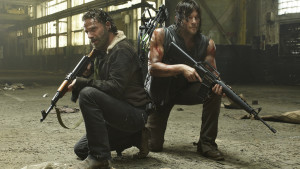